Commandants of the Majdanek camp

Majdanek, or rather KL Lublin - German Nazi concentration and extermination camp. It was the largest concentration camp (note: not the greatest extermination) in the General Government, which operated in the years 1941-1944. For less than three years of operation, at least 150,000 prisoners of various nationalities were sent to KL Lublin, of which about 78,000 died.

The construction of the camp began in October 1941 in the south-eastern district of Lublin, called Majdan Tatarski, by the decision of Heinrich Himmler of July 21, 1941. The order to build the camp was given by Hans Kammler on September 27, 1941, and the whole operation was supervised by Odilo Globocnik - SS and the police commander in the Lublin District. The construction plans were commissioned to the SS and Police Central Construction Board in Lublin, and Karl Otto Koch, the former commandant of the concentration camp in Buchenwald, was appointed the first commandant. The camp prisoners were to provide free labor, which was related to the expansion policy of the Third Reich as part of the Germanization of the conquered eastern territories.

According to the plans modified several times, the camp was to eventually accommodate 250,000 prisoners and cover an area of ​​516 hectares, which was to make it the largest concentration camp in Europe. The sudden stop of the offensive on the Eastern Front and the emergence of problems with supplying the camp with the necessary building materials prompted the SS to revise the general plan. Ultimately, by July 1944, on an area of ​​270 hectares, over 200 different buildings were erected (residential barracks, warehouses, workshops, SS administrative buildings, as well as elements of the extermination infrastructure - crematorium and gas chambers). The entire camp was divided into the following zones: administrative, economic and prison zone. The core of the camp staff were SS men and Volksdeutschs (e.g. from Romania and Yugoslavia), as well as former Soviet prisoners of war and Eastern collaborators, who had undergone appropriate training in the SS camp in Trawniki. In addition to men, about 30 women served in the camp as supervisors of the women's and children's camps established later. For almost three years of operation, the camp was managed by 5 commanders: Karl Otto Koch, Max Koegel, Arthur Florstedt, Martin Weiss, and Arthur Liebehenschel.

Initially, Majdanek functioned as a POW camp - Kriegsgefangenenlager der Waffen SS Lublin. In addition to the small number of Jews who were sent, incl. to work related to the construction of the camp, from October, mainly Soviet prisoners of war were sent there. In December 1941, civil prisoners of Polish nationality began to be imprisoned there, including people of peasant origin from the Zamość region who were imprisoned as hostages. Thus, the camp also began to function as a penal camp. From 1942, after the Wannsee conference, the Lublin camp also became a place of mass deportations of Jews from both the occupied territories of Poland and from abroad. In this phase of the camp's operation, for most of the deported Jews, Majdanek was a transit camp, from which a large number of people were sent to the death camps in Bełżec, Sobibór and Treblinka (created as part of Operation "Reinhard"). Only a small number of Jews who ended up in Majdanek were "spared" - provided that they met certain health, age and professional criteria (e.g. carpenter, bricklayer, shoemaker, etc.).

In the fall of 1942, gas chambers were opened in the camp, in which, using cylinders with carbon monoxide and Zyklon B, the killing of prisoners who were exhausted, sick, suspected of conspiracy and attempts to escape began in an "industrial" manner. On October 1, a women's camp was established, and then Majdanek also became a place where children, mainly of Jewish, Polish and Belarusian nationality, began to be imprisoned.

At the beginning of 1943, the deportation of Polish political prisoners from the territory of the General Government began. They were to serve as a source of free labor. Therefore, in February 1943, the camp was renamed a concentration camp - Konzentrationslager Lublin. In March, mass deportations of Belarusian citizens arrested as part of the action against "Gangs" began. Women and children from the camps in Vitebsk and Mogilev were also deported. Following the unsuccessful uprising in the Warsaw Ghetto, a decision was made to liquidate it, which resulted in the imprisonment of a group of about 20,000 Jews in KL Lublin. In May 1943, an unusual hospital for Soviet prisoners and invalids was also established.

In the summer of 1943, a pacification and displacement action under the code name "Werwolf I und II" was started in the Zamość region, as a result of which about 8,000 people were deported to the camp (mainly women and children), of whom over 6,000 were sent deep into the Reich as forced laborers. About 2000, thanks to the efforts of, among others, charity organizations (e.g. the Polish Red Cross), were released from the camp. Probably at that time, the decision was also made to liquidate the Jewish prisoners in KL Lublin and its sub-camps.

On November 3, 1943, in the concentration camp at Majdanek, the so-called action "Erntefest" ("Harvest Festival") began, during which the Nazis murdered over 18,000 Jews by shooting. That day was called "Bloody Wednesday" by the prisoners. It was the largest mass execution in the history of German concentration camps. On November 3 and 4, prisoners in other centers in the Lublin region (including labor camps in Poniatowa and Trawniki) were also murdered. In total, over 40,000 people were shot during 2 days, and the "Erntefest" operation completed the "action" of exterminating the Jewish population in the Lublin district.

In December 1943, a decision was made to stop the detention of prisoners capable of working at Majdanek (from then on, they were to be sent to the Gross Rosen and Auschwitz camps). At the same time, mass deportations of prisoners who were sick and unfit for work began, including the Sachsenhausen, Auschwitz, Buchenwald, Dachau and Neuengamme camps, precisely to the Majdanek camp, which was to act as a "hospital" and the place where enemies of the Nazi system were executed.

The beginning of 1944 was a period of intensified so-called "death transports". People held in Gestapo prisons in the General Government, mainly political prisoners, were deported and shot at KL Lublin.

Due to the approaching Eastern front, on April 1, 1944, the evacuation of the Majdanek camp began. A group of about 12,000-15,000 people whom the SS considered fit for work were transported to the still functioning concentration camps in the west (Gross Rosen, Plaszów, Ravensbrück, Mathausen). The remaining prisoners were deported to Auschwitz.

On July 22, 1944, the last group of prisoners (about 800), along with an SS escort, joined a group of about 200 prisoners from the sub-camp at Linden Street. A column of about 1,000 prisoners was directed towards Cielmów and then transported to Auschwitz by trains. 38 prisoners managed to escape from this group, and about 120 died during the last march from Majdanek.

On July 22, in the evening hours, the Red Army entered the camp and found a group of about 1,500 prisoners who were unable to march.

Konzentrationslager Lublin (Majdanek), for less than 3 years of operation, was remembered as a place of terror, persecution and places of mass murder. From the very beginning, there were bad living conditions, hunger, diseases, terrible sanitary conditions, a calculated system of penalties applied by the crew and functional prisoners, which, combined with exhausting slave labor, give an excellent example of a center where extermination was mainly based on the principle of "destruction through labor "(German" Vernichtung durch Arbeit "). Prisoners who were sick and unable to work were sentenced to death by shooting or gassing them in gas chambers.

Majdanek is one of the few camps which, due to the rapid offensive of the Red Army in 1944, was evacuated in a hurry, so the traces of the crime were not completely obliterated. A fairly large number of eyewitnesses also survived, and their testimonies and memories became hard evidence of the crimes committed there. Despite the information available, certain events or facts remain impossible to establish due to incomplete and divergent information.

In August 1944, the NKVD established a camp in field III, in which exposed soldiers of the Home Army and Peasant Battalions were imprisoned. 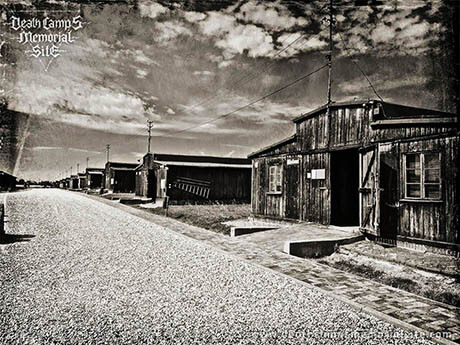 On the site of the former camp, some of the camp buildings have been preserved and made available to visitors (barracks, workshops, crematorium, gas chamber). The memory of 78,000 victims was commemorated by a mausoleum (near the place where the “Blood Wednesday” victims were murdered), as well as numerous monuments and plaques commemorating the death and suffering of prisoners.