Treblinka is mainly associated with the place of mass extermination, where in the years 1942-1943, according to estimated data, from 800,000 to 1 million people, mainly Jews, were murdered. However, not many people know that from the summer of 1941 there was also a penal labor camp, later called TREBLINKA I.

Treblinka I - German Nazi labor camp, operating in the years 1941-1944, in the forests near the town of Treblinka (about 100 km from Warsaw). It was established in the summer of 1941, and then in November it was officially announced as a labor camp Der SS- und Polizeiführer im Distrikt Warschau Arbeitslager Treblinka.

The area of ​​the camp occupied 16.5 ha, and throughout the entire period of its operation the commander was Theodor van Eupen. The camp was practically self-sufficient. There was even a bakery, stables, car workshop and a pool for SS-men. The camp crew were several SS-men and about 100 watchmen - SS Wachmannschaften (mainly Ukrainians, as well as Lithuanians and Latvians).

The conditions in the camp were extremely harsh. It was characterized by a very high death rate of prisoners. During the three years of operation, about 20,000 prisoners passed through the camp, of whom it is estimated that 10,000 to 12,000 died. At first, the prisoners were mainly Poles, then Jews from various parts of Europe were also deported there. The average number of prisoners was about 1000 to 2000 people.

The main reason for death were very difficult living conditions, inhuman treatment, lack of medical assistance, as well as hard and destructive work, among others in the gravel pit, as well as during the construction of the Treblinka II extermination camp. The prisoners also took part in blurring the traces of the crime, as well as the liquidation of the buildings of the camps. In the end, everyone was shot. In the near vicinity of the camp, there is the so-called place of execution, where SS men shot prisoners of the labor camp, as well as Roma and Sinti deported to Treblinka.

There were several escapes from the camp, but the Germans took many measures to prevent prisoners from escaping. Captured fugitives were punished with death and the principle of collective responsibility was introduced, according to which a successful escape involved the execution of ten or more prisoners employed in the same working command as the fugitive. Their family was also punished if the members were in the camp or their whereabouts were known to the German authorities.

Executions of an exceptionally cruel nature were also tools of terror. Franz Schwarz and the watchman Franz Swidersky murdered prisoners with a hammer or pickaxe. Executions took place in the drill ground, in front of the prisoners.

On July 23, 1944, due to the Red Army approaching, the Germans began to liquidate the camp. Polish prisoners were closed in one of the barracks, while SS men began to lead about 550 Jewish prisoners to the Maliszewski Forest in groups and shoot them over three previously dug graves. Several people survived the massacre.

In the nearby forest, in the place of execution, there are two monuments dedicated to the memory of the murdered, including a monument to the Roma and Sinti, as well as hundreds of concrete crosses, mainly dedicated to victims of Polish nationality.

After the war, very few people from the camp crew were tried and convicted. The camp commandant, Theodor van Eupen, was most likely killed by Soviet partisans on December 11, 1944 near the village of Lipówka in the Pińczów poviat, but information about his death was not clearly confirmed.

In the trial of the Treblinka extermination camp (1963), three SS men: Karl Prefi, Hans Heinbuch, and Johann Röge were accused. Ultimately, due to their poor health, all three were found unable to participate in the trial.

Despite being a labor camp, the camp can be classified as a "death camp" due to the very high death rate of prisoners and the number of victims, which - as I mentioned - was estimated at about 10,000 to 12,000 lives. 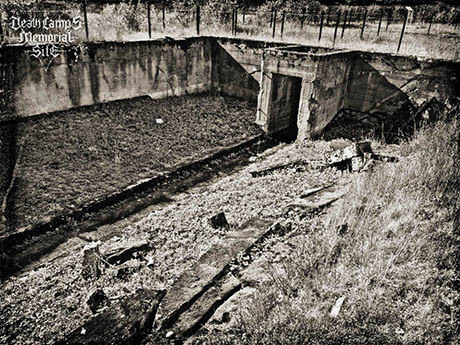