Revolt in Sobibor – an assault on immortality 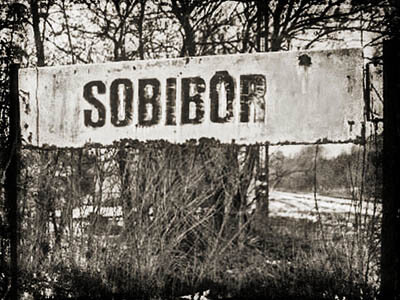 On October 14, 1943, an armed uprising of Sonderkommando prisoners took place in the German death camp in Sobibor. The goal was to escape from the camp and save themselves from death. In the extermination camps, apart from SS supervisors and Ukrainian watchmen, a small number of prisoners were selected from transports to serve the "extermination machine".

They were generally strong men and craftsmen, with only few women. Their duties included, among others, servicing crematories, burning corpses, sorting looted property and working in various commandos (carpentry, shoemaking). After a few months, often no more than three, the group responsible for burying and burning corpses was murdered and replaced by new prisoners.

After receiving secret information from the crew from the Bełżec camp about the planned liquidation of the Sobibor camp, the prisoners put everything on one card and prepare a revolt.

In the late summer and autumn of 1943, the last transports began to head for Sobibór, including Jews from liquidated ghettos in the East: in Vilnius, Lida. In the second half of September, several transports of Jews from Minsk reached Sobibór. Among them, there was the fourth group of prisoners, selected to work on the construction of the camp. Among them was Aleksander Pechersky and a group of Soviet prisoners of war. Aleksander Pechersky's group joined the previously established camp underground, lead by Leon Feldhendler. The underground resistance was  Until then, most prisoners had no experience in combat (as they were mainly civilians), and the addition of Aleksander Pechersky was a chance for the success of the previously planned prisoner revolt.

On October 14, around 3:30pm, the uprising began. After cutting off telephone communication, prisoners lured SS men to stolen property barracks, workshops and other buildings under various pretexts. The torturers were silently killed using tools and other items.

Around 5:00pm (afternoon roll call), a fight began with the SS crew and the Ukrainian guards of the camp. Barbed wire fences were forced through. The prisoners began to flee to a nearby forest. Some of them died during the watchmen’s fire and from the explosion of anti-personnel mines. Minefields were located just behind the camp fence.

According to estimates from various sources, there were about 600 prisoners in the camp, of which 300 managed to escape. In the following days, 107 people were captured and shot. Among the torturers, 12 SS crew members died. They were buried with military honors at the German war cemetery in Chełm. Two watchmen were killed and several were injured.

Until the end of the war, 46 participants of the revolt and a few people who had managed to escape from the camp earlier survived. None of the Sonderkommando prisoners from Camp III (death zone) survived.

After the uprising, Alexander “Sasha” Pechersky joined the partisan unit, which established contact with the Red Army, and then returned to active service. Due to the fact that in the Soviet Union being captivated by the Germans was considered a “shameful transgression”, he was downgraded to the rank of private and sent to a penal battalion. After the war, he was persecuted and he spent several months in prison. After being released, he remained unemployed for a few years.