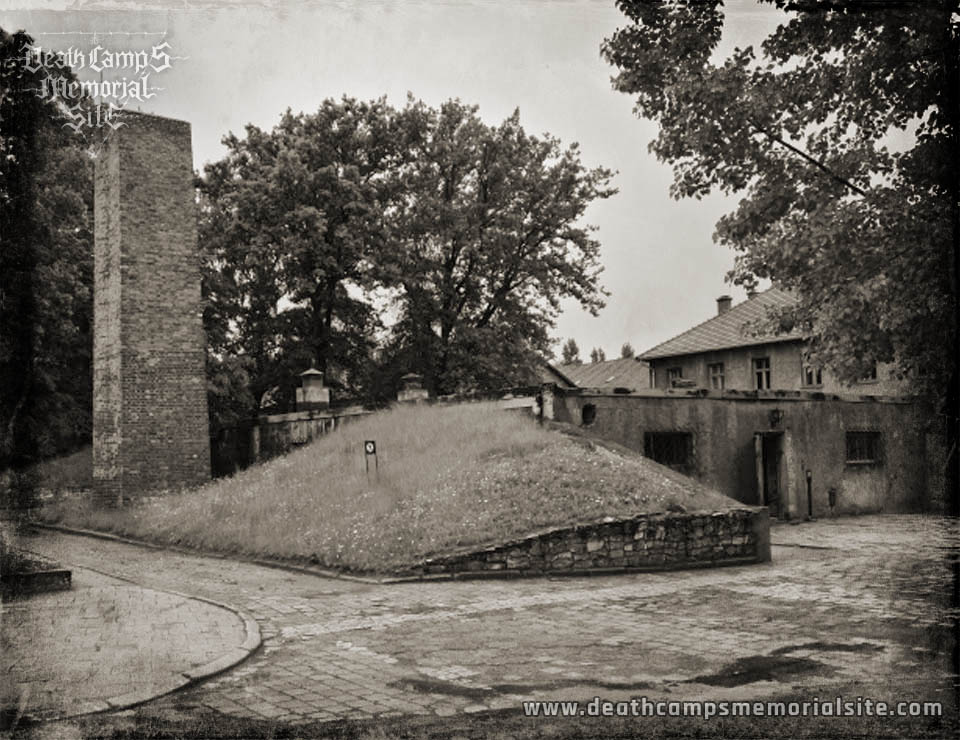 In concentration and extermination camps, the Germans used gas chambers for mass extermination, mainly of the Jewish people, but also of Poles, Soviets, Roma, and prisoners deported from actually every occupied European country. Before the Germans started the extermination with the use of the most known agent, gas "Zyklon B", used in the camps: Auschwitz, Majdanek, Stutthof, the SS used gas chambers fueled with carbon monoxide from diesel / petrol engine exhaust.

The practice took place mainly in three camps established in the General Government as part of the "Einsatz Reinhardt" operation (Treblinka, Sobibór, Bełżec).

In the first camp for immediate extermination, (Kulmhof) the Germans used mobile gas chambers - these were specially adapted closed-circuit trucks ("Gas Van"). The victims were forced to enter the so-called "trunk" where they then died in the fumes of the poisonous exhaust of the engine. Such chambers were also used at the very beginning in the camp in Bełżec and in the territories of the USSR, where Einsatzgruppen units rarely used such a solution.

The genesis of such a method of mass extermination has its roots back in pre-war times. As part of racial improvement, the Germans carried out action T4 ("Aktion T4"), aimed at the elimination of mentally ill German citizens, who were a genetic and financial burden for the Third Reich. At the turn of May and June 1940, over 2,000 disabled patients from the care center in Działdowo were murdered in car gas chambers - 1,558 Germans and about 500 Poles. The action was suspended due to public pressure, but many of its participants later supervised the extermination process in various camps - the so-called "T4 Action Veterans".

Such trucks were used in order to immediately kill deported prisoners in the Kulmhof camp for the entire two periods of extermination. It is estimated that about 200,000 people died in this way, including about 4,000 Roma and countless Poles, children from the Zamość region, as well as 82 children deported from Czech Lidice in retaliation for the assassination of Reinhard Heydrich. Gas Vans were also used in the Mauthausen-Gusen camp.

Both during Operation T4 and in the Majdanek camp, gas chambers were also supplied with gas from cylinders - also with lethal carbon monoxide. Such a solution was problematic and expensive due to logistical problems and a very high demand for lethal gas.

In September 1941, in the basement of Block 11 in the Auschwitz camp, the SS carried out the first mass murder attempt using Zyklon B. The victims of the crimes were Soviet prisoners of war and sick Polish prisoners, selected from the camp hospital.

Zyklon B was known before, but was used for deratization and disinfection. From 1942, gas chambers adapted to this killing technique began to be created. In the Auschwitz camp, the first chamber was established on the premises of the main camp in the ammunition depot. Four large gas chambers with crematoria were built in the Birkenau camp. However, the original plans for the crematoria were modified. The morgue rooms were converted into undressing rooms and a room into which Zyklon B granules were thrown through specially adapted holes and baskets. However, before they were put into use in 1943, prisoners were killed in two adapted rural houses known as the Red and the White House.

In the Majdanek camp, there were also chambers supplied with Zyklon B and carbon monoxide from a gas cylinder. Due to the fact that KL Majdanek was a concentration camp more than an extermination camp and the fact that there were three large camps of immediate extermination in the General Government, the chambers were used less frequently, mainly to eliminate sick and useless prisoners. These rooms were also used as disinfection devices.

In the three largest death camps established as part of the "Einsatz Reinhardt" operation, i.e. Bełżec, Sobibór and Treblinka, the gas chambers functioned in the form of buildings that resembled baths. There were rooms supplied by an installation powered by a diesel / petrol engine (e.g. from the T-34 tank). One of the people who where most closely associated with this practice was Lorenz Hackenholt, responsible for the operation of the gas chambers in the Bełżec camp. He designed and supervised the construction of gas chambers in the camps in Sobibór and Treblinka. Due to the nature of his "work", he was nicknamed Gasmeister.

In 1944, in the German concentration camp Stutthof, the building used for disinfection was converted into a gas chamber. Mainly Jews were sent there, incl. from the Auschwitz camp, as well as Poles, Soviet prisoners of war and prisoners of various nationalities detained in the Stutthof camp who were sick and unfit for work.

Gas chambers powered by Zyklon B were also used in camps located in Germany, i.e. Ravensbrück, Dachau (according to the witness’s account, although the chamber was fully functional, only a few prisoners were killed there). However, the main extermination process took place in the eastern territories occupied by the Germans.

In 1945, just before the evacuation of the Auschwitz Birkenau camp, four gas chambers were liquidated, and the useful infrastructure was dismantled and sent deep into the Reich. Buildings were blown up. The death camps in Bełżec, Sobibór and Treblinka were obliterated. However, the gas chambers in Majdanek have survived (the blue sediment of Zyklon B is still visible there), as well as the chamber in Stutthof and the first chamber in the main camp of Auschwitz I. Immediately after the war, in 1945, one of the gas trucks was found in Koło. A damaged Magirus-Deutz car was abandoned near the German extermination camp Kulmhof.