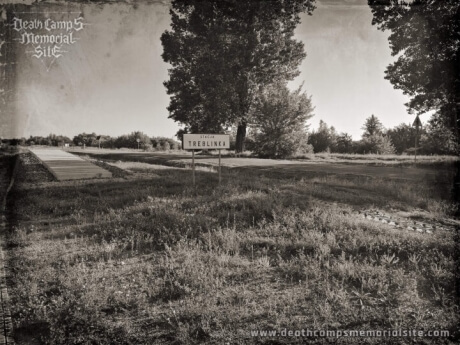 Treblinka railway station - the no longer existing building of the railway station where trains stopped just before the entrance to the Treblinka II camp. Transports of Jews murdered in one of the largest German extermination camps passed through this station. Most of Jewish Warsaw ended up there, as well as transports from all over occupied Europe.

In the station, about 4.5 km from the camp, there were two railway sidings, 615 and 735 meters long. On average, the transports consisted of 60 cattle wagons (the entire train was about 560m). After the arrival of the transport, 20 wagons were rolled onto the ramp in the Treblinka II camp, where the weakened and exhausted prisoners were actually sent straight to the gas chambers. People who could not reach the gas chambers on their own were directed to the so-called "Lazaret", where they were shot. The remaining victims, locked in carriages, were waiting to be killed at the above-mentioned ramps. The extermination in the Treblinka camp took place from morning to evening, so it often happened that victims locked in carriages waited all night on the railway sidings.

The waiting wagons were under the constant supervision of the SS Wachmannschaften, and sporadic attempts to escape resulted in shooting prisoners. On August 27, 1942, an order was issued prohibiting trains other than those carrying deported victims from stopping at the Treblinka station. The Germans wanted to keep the entire process of extermination and the existence of the death camps a secret.

Franciszek Ząbecki, a Polish railwayman, worked as a supervisor at the Treblinka station throughout the camp's entire operation period, which made him an eyewitness to the deportation. On August 6, 1944, he managed to remove documents confirming the crimes committed in the camp from the mined building of the Treblinka railway station. These materials were used, among others, in trials against German and Ukrainian torturers.

Camp Treblinka II was the largest extermination center in the General Government, and the second, after Auschwitz-Birkenau, in occupied Europe. It functioned from July 1942 to August 1943. The exact number of victims cannot be determined, but the range is from 800,000 to even 1,000,000.