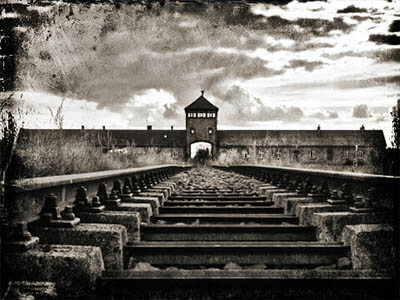 On October 23, 1943, a transport of 1,800 Polish Jews from Bergen-Belsen was directed to the German Auschwitz Birkenau camp. All the deportees had passports entitling them to emigrate to South America, which they purchased for a large fee and with the approval of Gestapo.

The group of prisoners was supposed to travel to Bergau near Dresden, where they had previously been ordered to check in their luggage, but instead of Bergau, they ended up in Auschwitz.

After checking the documents, the SS sent the group to "disinfection" before their further journey. The women were directed to the gas chamber building and crematorium no.2, and men to crematorium no.3.

In the undressing room of gas chamber building no. 2, SS men started taking jewelery from women. Also, the women were ordered to undress quickly. At that time, one of the women (most likely Franciszka Mann) realized that they were about to be gassed. Hence, she threw a piece of clothing on SS Oberscharführer Josef Schillinger, then grabbed his pistol and fired shots in his direction and SS in the direction of Scharführer Wilhelm Emmerich. In the aftermath, other women pounced on the torturers.

The SS crew very quickly suppressed the rebellion and eventually all the women were shot. Josef Schillinger died on the way to the hospital in Katowice. Wilhelm Emmerich survived, but he had a limp for the rest of his life.