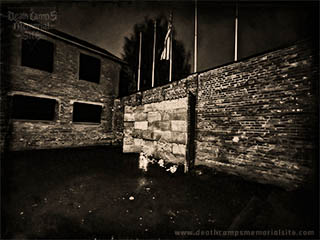 On the Independence Day celebrated in Poland, 151 people were shot in the German concentration camp Auschwitz. It was also the first mass execution performed by shooting in the back of the head with a silent-firing small-caliber weapon. The execution took place at the "death wall" in the courtyard of Block 11, known as the "Death Block".

The main perpetrator of this crime was Rapportführer Gerhard Palitzsch, who was one of the greatest executioners of the Auschwitz camp. Prisoners detained in Block 11 had to take off all their clothes, and then were individually led out and murdered with a shot in the back of the head (Geinckschuss).

Among 151 victims were: 80 Poles brought from Mysłowice and detained in the Death Block, 27 prisoners of KL Auschwitz detained in Block 11 for various offenses and 44 prisoners selected from the camp by the political unit. The entire operation was supervised by the camp commandant, Rudolf Hoess, Karl Fritzsch, and the camp doctor. One of the eyewitnesses to this execution was a prisoner named Ludwik Banach, who at that time worked in Block 11 as a cleaner.