Auschwitz Birkenau - "The Road of Death" 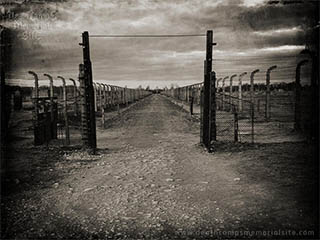 Perpendicular to the ramp, between camps BII C and BII D, there is the so-called "Road of death". Surrounded on both sides by a 4-meter-high fence with barbed wire at (360V / 400V), it was the way to crematoria 4 and 5, located in the westernmost part of the largest German extermination camp.

After arriving at the German Auschwitz Birkenau camp, the deported prisoners underwent selection at the railway ramp. Doctors and SS officers decided about the life or death of a prisoner with one wave of the hand. Virtually all elderly people, women with children, children, sick and weakened middle-aged men and women were directed to the gas chambers. It happened that entire transports were sent to death without selection.

Prisoners who had already spent some time at the camp and were sentenced to death for various reasons also went down that road. The bodies of deceased prisoners were also transported there by trucks to be burned in the crematoria.