Treblinka I - execution site in the Maliszewski Forest 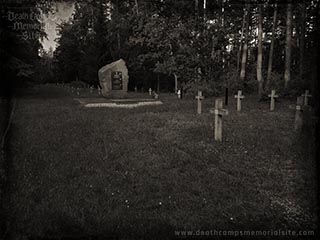 At a distance of approximately 500m from the German forced labor camp Treblinka I, in the nearby Maliszewski Forest, there is the so-called "execution site". The remains of several thousand prisoners of the penal labor camp, who were shot or died due to inhumane living conditions, exhausting work, diseases, wounds suffered during work, or breach of camp regulations, are buried here.

On the order of the governor of the Warsaw district, Ludwig Fischer, prisoners from Warsaw, Sokołów Podlaski and the surrounding towns were also deported and shot at the execution site at the German camp Treblinka. On March 2, 1942, about 100 political prisoners brought from the Pawiak prison in Warsaw and the Gestapo detention center were executed there. From April 1942, Jews from the Warsaw ghetto were also shot there. In the fall of 1942, prisoners suffering from typhus were murdered at the execution site. Epidemics of typhus often broke out in this type of camps.

In the years 1942-1943, Roma and Sinti were also murdered there. Like Jews and Slavs, they were recognized as inferior race by the Germans. Most likely in November 1943, a group of Italian officers and soldiers were shot at the execution site. Executions were carried out until the last moment of the camp's operation, i.e. until July 1944. The executors were Germans and members of the SS Wachmannschaften (mainly Ukrainians and Soviet Volksdeutsche) serving in the camp. Today, there are two monuments dedicated to the memory of the murdered, including the Roma and Sinti monument, as well as hundreds of concrete crosses.

Treblinka I - a German Nazi labor camp operating in 1941-1943 in the forests near the town of Treblinka (about 100 km from Warsaw). It was established in the summer of 1941, and then, in November, it was officially declared a labor camp named Der SS und Polizeiführer im Distrikt Warschau Arbeitslager Treblinka. During the three years of operation, about 20,000 prisoners passed through the camp. It is estimated that between 10,000 and 12,000 victims died.