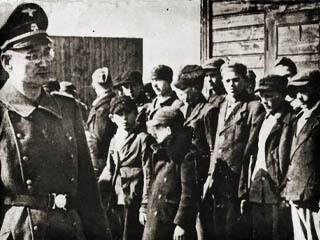 On December 11, 1942, a preventive camp for young Poles was established in the Litzmannstadt ghetto (the Łódź ghetto) - Polen-Jugendverwahrlager der Sicherheitspolizei in Litzmannstadt. Children and adolescents aged 2 to 16 were sent to the camp.

The prisoners of the camp were children and grandchildren of members of the resistance movement, orphans, as well as children of Jehovah's Witnesses or people who did not sign the Volkslist, and children arrested for, for example, illegal trafficking, suspected of being active in the resistance movement, or for petty crimes (e.g. fare dodging). Children destined for "Germanization" were also imprisoned in the camp and handed over to German families after their stay. The camp was also known under the names: "Little Oświęcim", Kinder-KL Litzmannstadt, “the camp at Industrial Street”.

** The concept of establishing a camp for Polish children appeared in the summer of 1941, and its originator was the head of the National Youth Office (Landesjugendamt) in Katowice, Alvin Brockmann. The main inspector of German concentration camps, Oswald Pohl, became interested in the project, and on November 28, 1941, he obtained the approval of his superior, the head of the SS, Heinrich Himmler. The positive opinion of Dr. Hans Muthesius, a lawyer, was also used. He stressed "the need to isolate minor Poles and educate them through work so as not to demoralize German children." The camp was based on the German juvenile camp in Moringen in Lower Saxony, which had been operating since 1941, where young people from Czechoslovakia and Poland were also imprisoned.

The camp was established on an area of ​​about five hectares, within Górnicza Street (Robertstraße), Emilii Plater Street (Maxstraße), Bracka Street (Ewaldstraße) and Przemysłowa Street (Gewerbestraße). The camp was commonly called "the camp at Industrial (Przemysłowa) Street ”due to the location of the entrance gate and the main camp alley. The camp area was surrounded by a 3-meter wooden fence with barbed wire. Residential buildings which had previously been used by Jews imprisoned in the ghetto were adapted to the needs of the camp. There were apartment blocks, workshops, camp infrastructure buildings (kitchens, laundries, canteens, hospital), as well as guardhouses, the headquarters, a shelter for the crew and an assembly square.

The camp was divided into sub-camps for girls and boys. Children aged 8-16 worked in the camp factory. The children worked from 8 a.m. to 6 p.m. with an hour break for a meal (12 a.m. to 1 p.m.) in the sewing room, weaving wicker objects and straightening needles. From the spring of 1943, the stronger children were sent to work in the fields and on farms. Children aged 2-8 were subjected to "Germanization". German upbringing was instilled in them and the German language was taught.

Terror prevailed in the facility, corporal punishment (flogging) was applied, children were imprisoned, mistreated and mentally abused for the slightest breach of camp regulations. In addition, there were terrible living conditions in the camp, overcrowding, lack of sanitary facilities, hunger and insufficiently heated buildings, which contributed to the development of diseases. One of them was typhus, the epidemic of which broke out in early 1944.

The facility also played an "educational" role. Children were sent there for a term of imprisonment (for example, three or six months) and then released home. Parents could also meet children in prison. Some of the children from the "camp at Industrial Street" were sent to the camps and branches of Auschwitz, Lublin, Stutthof, Gross Rosen... As a result of the approaching front, the Germans left the camp in January 1945, taking and destroying almost the entire camp documentation. A few hundred children, weakened by hunger, frost and diseases, remained in the deserted camp until January 19, 1945.

It is estimated that from 1942 to January 1945 about 3,500 Polish children were imprisoned in the camp, of whom about 200 died. The camp did not have the formal status of a concentration camp, but we know from the accounts of witnesses and people who survived this hell that the facility was not that different from concentration camps or forced labor camps for adults.