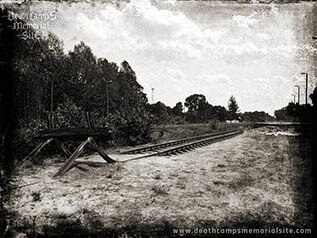 The railway ramp in Sobibór is one of the few buildings which can be seen until this day in the area of ​​the German extermination camp that operated in 1942–1943.

It is located at one of the four tracks belonging to the Sobibór station, where transports with deported prisoners arrived. The ramp and track were fenced off with a barbed wire fence and masked with pine branches interlaced through wires.

It is estimated that out of approximately 170-180,000 Jews deported and murdered in Sobibór, 84,000 came by rail from the Netherlands, Germany, Austria, Slovakia, France, the Protectorate of Bohemia and Moravia, Belarus and Russia. The trains entered the railway siding within the camp, and then a selection was made on the ramp during which a small group of people forced to slave labor in the camp was selected.

People who could move independently were transferred to camp no. II. The newcomers were divided into groups of men and women, and their belongings were taken from them. Then, they were sent to death to camp III, where the gas chambers and mass graves were located. The elderly, the sick and the infirm who could not walk on their own were shot in a nearby chapel. Later, they were taken to camp III, where they were killed with a shot to the back of the head in the "hospital".