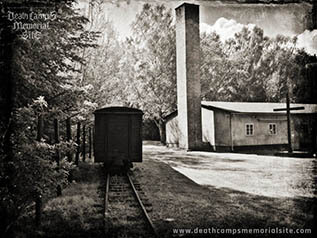 Sonderbehandlung - murdering women with Zyklon B by the Germans in the narrow-gauge railway cars in in the German concentration and extermination camp Stutthof.

The killing of female prisoners in railway cars took place in the German Stutthof concentration and extermination camp as part of Operation Sonderbehandlung. Under the guise of working in an external camp to repair stockings, darning socks, etc. groups of women were selected and then given needles and threads. Suspecting nothing, they boarded the narrow-gauge railway cars.

Then, the train departed and, after passing one or two stations, returned to the camp. On departure, Zyklon B granules were thrown into the sealed wagon. The corpses were unloaded from the returning transport and burned in the crematorium.

It is estimated that about 2,000 people died in "Sonderbehandlung" action.

KL Stutthof - former German concentration and exrtermination camp operating in 1939-1945, established by the Germans right after the outbreak of the war, near the Free City of Danzig in the town of Stutthof (Sztutowo).

From July 1944, Stutthof also became an extermination camp, where SS men killed prisoners in an "industrial" manner, using Zyklon B.

Until 1945, KL Stutthof was at the head of a highly developed system of sub-camps and external commandos, the number of which - depending on the adopted criteria - varied from 40 to 110. Prisoners worked as slaves for German companies (including Deutsche Ausrüstungswerke (DAW), Focke -Wulff, Gerhard Eppe).