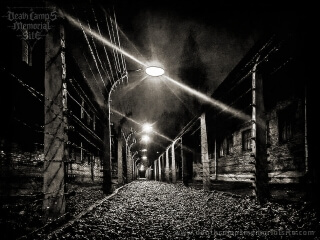 On December 24, 1940, the first Christmas Eve took place in the German Nazi concentration camp KL Auschwitz. On the assembly square, there was a Christmas tree illuminated by electric lamps, and the bodies of prisoners who died while working or froze to death during the assembly were placed under the tree.

These were the "gifts", as the camp supervisor, Lagerfuehrer Karl Fritzsch, described according to the testimony of witnesses. It was also forbidden to sing Christmas carols in Polish in the camp.

Before Christmas, there was a meeting between the commandant Rudolf Hoess and two priests from the Oświęcim parish. They were seeking the possibility of holding a holy mass for prisoners on the occasion of the upcoming Christmas. However, the permit was not granted, referring to the provision in the camp regulations which did not allow the celebration of services.

At the meeting, the commandant agreed to accept food parcels for prisoners on the occasion of Christmas. The "food parcels" campaign was initiated by the Archbishop of Krakow, Adam Sapieha, and the fundraiser was organized by the local population and church institutions. About 6,000 kg of gifts were collected, which, packed in one-kilogram parcels, were successively sent by post. The prisoners received their first packages right after the New Year.

It is also worth noting that on December 24/25/26 no prisoners were detained (deported) in KL Auschwitz.