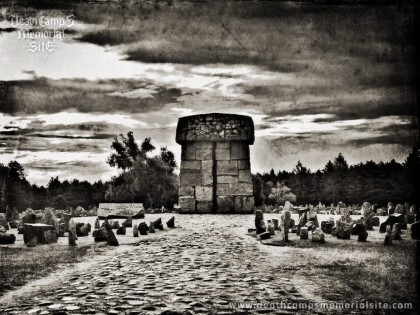 Very similar gas chambers operated in the three German Nazi extermination camps created as part of Operation Reinhard. All of them resembled Jewish ritual baths, both from the outside and inside. They were all located in the separated and masked zone no. III, the so-called death zone, camp no. 3 or camp of the dead.

In each of the camps it was a concrete, rectangular building with an extension for an internal combustion engine. A system was connected to the building through which the deadly exhaust fumes from the engine were pumped into the individual chambers. Then, the bodies of the gassed victims were taken by members of a commando which consisted of prisoners and buried in a mass grave, or in the later periods of the camps' operation, they were burned on combustion grates.

In all camps, they were most likely different engines. Both from the accounts of very few witnesses and the perpetrators, contradictory opinions emerge - was it a diesel or a gasoline engine? Was it an engine from a Soviet tank or a Renault engine? For example, gasmasters from Sobibór, who were professional mechanics, had different opinions about the engine model.

One of the main people responsible for the design and construction of the chambers was Lorenz Hackenholt, a German Nazi with the rank of SS-Hauptscharführer. He was a crew member of the Bełżec death camp, where he was responsible for the functioning of the gas chambers. Based on his experience in the Bełżec camp, he designed and later supervised the construction of chambers in the German camps in Sobibór and Treblinka.

Considering the data given by the Holocaust Museum in the USA, only in these three camps, during the period of mass deportations, about 1,500,000 (more than 1.5 million) people were murdered by the Germans and the collaborators from the East of the SS Wachmannschaften (Ukrainians, Belarusians, etc.).

The victims were mainly Jews and Roma and Sinti from the territories of the occupied countries: Poland, Austria, Bulgaria, Belgium, the Czech Republic, Slovakia, France, Greece, Yugoslavia, Germany, the Netherlands, Russia, Ukraine, Belarus and other territories occupied by Germany and its allies.

These are current photos of the places where the gas chambers used to be located: