The ramp no.3 - Auschwitz Birkenau 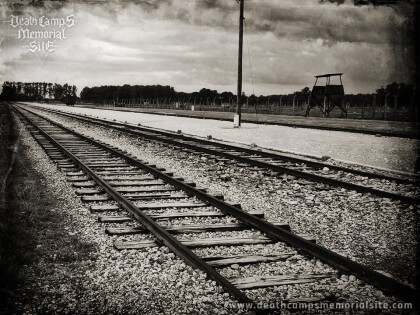 The ramp no.3 was located inside the Auschwitz II Birkenau camp, and went into operation in May 1944 in connection with the anticipated arrival of transports of Hungarian Jews.  The railroad spur along this ramp ran as far as gas chambers and crematorium II and III.

It is estimated that over half a million people arrived there starting from mid-May 1944, mainly: Hungarian Jews, Warsaw Uprising insurgents, Jews from the liquidated Litzmannstadt Ghetto, some of the transports from the ghetto in Terezin and from Slovakia and prisoners from other camps, such as Majdanek or Płaszów.

Upon arrival, the prisoners were divided into two groups, the first one being women with children, and the other one men and older boys. The groups were selected by doctors and the camp staff. During the Hungarian Action, small groups of prisoners fit for work were selected. The rest of the deportees (80% of the transport on average), i.e. children under the age of 14, the elderly, the sick, were directed directly to the gas chambers. Sometimes it happened that entire transports, without selection, were killed in this way.

One of the doctors who conducted the selections was Dr. Josef Mengele (known as the "Angel of Death"). Together with the SS men, he searched for victims for his experiments. He was particularly interested in twins and dwarfs on whom he conducted pseudo-medical research - incl. over multiple pregnancies, heredity and racial characteristics.

The stolen property was delivered to the warehouses called "Canada" on the west side of the camp and then sent deep into the Third Reich.