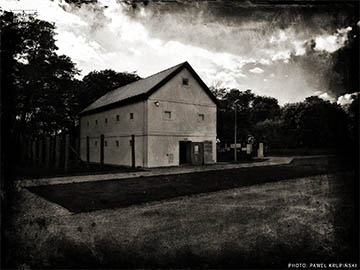 On the night of January 17-18, 1945, the German camp Kulmhof (Chełmno nad Nerem) was evacuated. The SS men, under the command of Hans Bothmann, began the liquidation of the last surviving prisoners. The last 47 prisoners were held in a granary in Chełmno. Among them were craftsmen and people responsible for covering up the traces of the crime.

It was on that very night that a group of SS men surrounded the granary where the prisoners were staying. The prisoners were led out in groups of five and then shot. Aware of their fate, the prisoners took advantage of the moment of inattention of the German torturers, instigating a revolt.

Two guards who entered to shoot the next group were attacked by desperate prisoners, and died as a result. Seeing the whole situation, the camp commandant, Bothmann, ordered the doors to be closed and the granary, which still held alive prisoners, set on fire. SS men also started firing at the granary.

The second person who managed to survive was Mieczysław Żurawski. He took advantage of the commotion in the granary and made an attempt to escape. Despite an organized pursuit, he managed to hide and survived the massacre and the death camp at Kulmhof.

The following excerpts from the statements of Szymon Srebrnik and Mieczysław Żurawski describe the events of the night of January 17-18, 1945:

“When the Soviet troops were approaching […], all the workers were called in and ordered to leave in fives - the area was illuminated by car refractors. I came out in the first group of five: Lenz (Wilhelm Lenz - a member of the SS crew - author's note) ordered to lie down on the ground. He fired his revolver in the back of each person’s head, one by one. I passed out. I regained consciousness when there was no one around me. All SS men fired inside the granary. I crawled over to the car which illuminated the area and broke both refractors. Taking advantage of the darkness, I escaped. The wound was not fatal. The bullet passed through the neck, passed through the mouth and, piercing the nose, came out."

“We knew that we were all lost and they would shoot us one by one. I knocked on the ceiling with a board, alerting the tailors and shoemakers upstairs. I decided to save myself. I stood with a knife in my hand, by the door behind the blanket. When the fourth group of five was being led out and the door was closed, I threw myself at the door with all full force […] I ran forward, dealing blows with a knife. I ran like a madman. As I found out later, I cut off one of the gendarme’s nose and the other’s ear. I was shot and a bullet hit my right leg's thigh muscles. One of the gendarmes hit me in the leg with a butt of his rifle, but I kept running away. I got through the fence, cutting my right hand to the bone, and then ran towards the forest. A chase was organized [...] I managed to reach the village of Umień without being noticed, where I hid in the barn. I knew that the granary was on fire. I also heard shots."

After the war, Mieczysław (Mordechaj) Żurawski and Szymon Srebrnik gave extensive testimony about the Kulmhof extermination camp in the second phase of its operation.

It was the main place of mass extermination of the Jewish population from the Wartheland and people deported from the Litzmannstadt Ghetto. Poles, Soviet prisoners of war, children from Czech Lidice, as well as about 4,000 Roma and Sinti also died there. The total number of victims of the camp is estimated at around 200,000 people.