Stanisław Kaszyński - The Silent Hero from Chełmno on the Ner 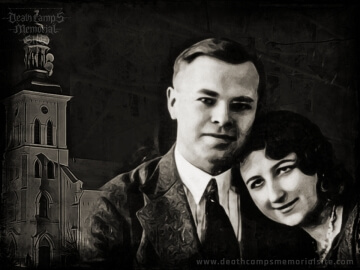 Stanisław Kaszyński was a Polish local government official and social activist during the Second Polish Republic and a long-time secretary of the Chełmno commune. He was an educated man, respected and liked by the inhabitants, but he also secretly collaborated with the Polish Underground State. Units of the Union for Armed Struggle and the Home Army (from 1942) operated in this area.

In January 1942, Kaszyński took the initiative to transfer information about the crimes committed against the Jews in the German death camp Kulmhof to the West. His letter, which was to be sent to the International Red Cross in Switzerland, was, however, intercepted by the SS. As a consequence, Stanisław Kaszyński was arrested and imprisoned.

After a few days, when Kaszyński was led out under escort, he made an attempt to escape during which he was shot. It was most likely on February 2 (or 3), 1942, near the palace which housed the undressing room for prisoners and the entrance to the gas chambers in gas trucks (Gas Vans). Kaszyński's body was buried in an unknown place in the Rzuchowski Forest.

Stanisław Kaszyński's wife, Karolina, who was then pregnant, was deported to a German women's camp in Łódź, and then transferred to the Gestapo prison, where she was murdered. Stanisław and Karolina Kaszyński orphaned four children who, after their mother's arrest, were looked after by Karolina's  friend, Cecylia Sońta.

In 1991, a monument commemorating Stanisław Kaszyński was unveiled in the Rzuchowski Forest (where the bodies of the gassed victims were buried)