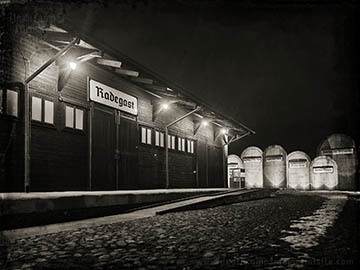 During World War II, the facility served as a reloading point for food and raw materials intended for the population and workplaces of the Litzmannstadt (Łódź) Ghetto, as well as a place where deported Jews, mainly from western and southern Europe, came.

From January 1942, the station became the place from which the Jewish population was transported to Kulmhof extermination camp in Chełmno on the Ner and Auschwitz-Birkenau and, to a lesser extent, to other concentration camps.

It is estimated that about 145,000 people, mostly Jews, passed through the station. On August 29, 1944, the Łódź ghetto was completely liquidated. That day, the last transport left for the Auschwitz Birkenau extermination camp. In the period from August 9 to 29, approximately 67,000 Jews were deported to Auschwitz Birkenau from the Łódź ghetto (Litzmannstadt Ghetto). Shortly after their arrival, the Germans sent most of them to the gas chambers.

During World War II, in the building of the nearby former factory, there was an Extended Police Prison for the residents of the Reichsgau Wartheland. On the night of January 17-18, 1945 it was liquidated. The Germans shot about 1,500 people.

Currently, there is a museum and a memorial site, as well as a railway siding with a steam locomotive and wagons in which prisoners were deported.

Kriegslokomotive Baureihe BR52 / Ty2-702 - a war locomotive produced in 1942-1945 as a successor to the BR 44 model. The newly produced locomotive was to be resistant to Russian winter and reliable on poor eastern tracks. In 1942, the program for the construction of a new locomotive was included in the strategic tasks of the Ministry of Armaments and Munitions of the Third Reich. In the same year, in September, a new universal steam locomotive with solid thermal insulation and a heated driver's booth left the Borsig factory in Berlin.

The surviving carriages made the last journey of most of the deportees to Auschwitz and other German Nazi concentration and extermination camps, but initially also passenger carriages were sent to the Kulmhof camp as disguise. Most of the "death" transports, however, took place in wagons which were originally used to transport cattle. On average, the Germans and the collaborators packed up to 180 people in one car. The journey often took several days. Without food, water and access to sanitary facilities, some of the deported prisoners died before reaching the camp. This type of cattle car was also used during the evacuation of camps.

There is also a so-called "Tunel of Deportees" - Holocaust Memorial Litzmannstadt Ghetto, which commemorates the extermination of nearly 200,000 Jews deported to the second largest ghetto established by the Germans in occupied Poland and also the longest functioning one. There are also monuments resembling Jewish tombstones along with the names of the concentration and extermination camps to which the victims of Nazi terror were deported.

There is also a very interesting model of the Litzmannstadt Ghetto in the museum building.