Ilse Koch - The Bitch of Buchenwald 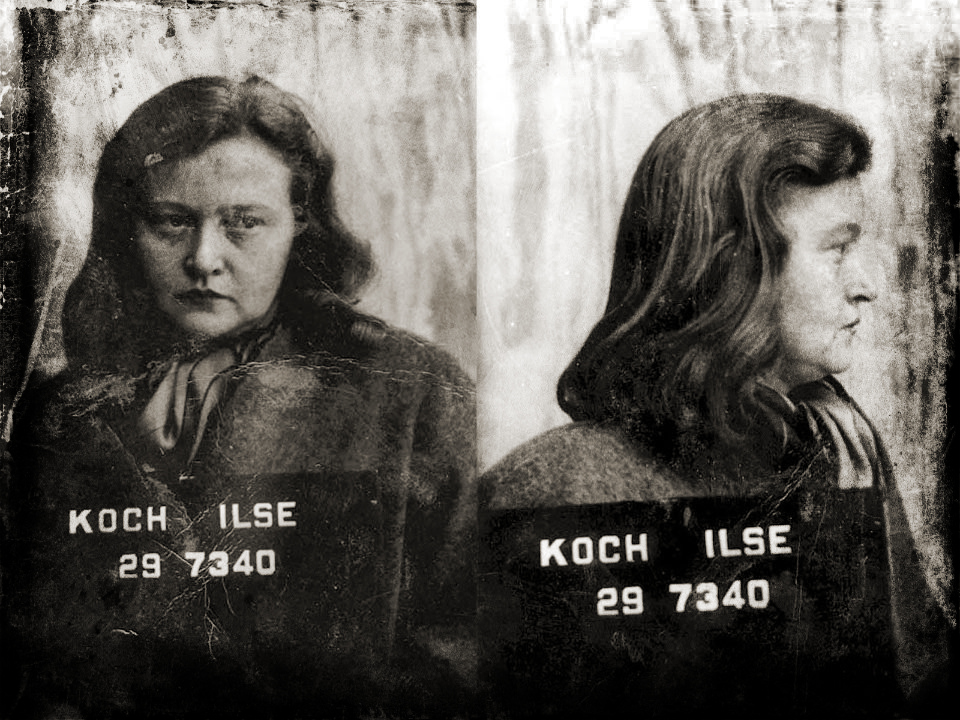 Margarete Ilse Koch (née Köhler) - (born September 22, 1906 in Dresden, died September 1, 1967 in Aichach) - German supervisor (SS-Aufseherin) in the German Nazi concentration camp in Buchenwald. A war criminal, one of the most sadistic overseers, also known for her obsession with human skin, from which she ordered to make, among others, gloves or handbags. Known as "the bitch of Buchenwald" or "the witch of Buchenwald".

Ilse joined the NSDAP in 1932 (ID number 1130836), where she worked, among others, as a secretary and typist. On May 25, 1936, she married Karl Otto Koch, who in 1937 was appointed to the position of the newly established German Nazi concentration camp Buchenwald. She and her husband lived in a villa near the camp, and over time Ilse was promoted to the position of the main supervisor of the women's camp. In the years 1938-1941 she gave birth to three children. She loved horses. A horse riding hall was built especially for her in Buchenwald. Ilse also went for rides around the camp, trampling and whipping random prisoners.

The commandant's wife was also obsessed with human skin, especially the skin adorned with tattoos. She often ordered prisoners to strip naked and carried out "selections" looking for prisoners with tattoos. The selected prisoner was usually killed with an injection, and then the skin was peeled off, from which gloves and handbags were sewn, and books were bound. Leather lampshades were made to decorate the house, and the villa was decorated with prepared skulls of killed prisoners.

In 1941, Karl Koch was transferred to the position of the newly established KL Lublin (Majdanek) concentration camp. Ilse remained in Buchenwald, where she had an affair with with Arthur Florstedt (later commandant of the Majdanek camp) and Waldemar Hoven, the chief physician of Buchenwald. Ilse was a sexual deviant. She organized numerous orgies with SS men and their wives, forced male prisoners to rape female prisoners in front of her, and walked around the camp half-naked or in skimpy clothes, provoking prisoners to make eye contact, which often resulted in death for them. She was repeatedly disciplined by the SS for her sexual behavior.

In August 1943, Ilse and Karl Koch were arrested by the SS on charges of corruption, triple murder and misappropriation of property from prisoners in the camp. Eventually, in December 1944, Ilse Koch was acquitted, but her husband was found guilty and executed in early April 1945. On June 30, 1945 Ilse was arrested by the US military, and then in 1947 - as the only woman - brought to trial. She was charged in the Buchenwald trial in Dachau. For her crimes against humanity, she was sentenced to life imprisonment, which was soon changed to 4 years in prison, among others because Ilse became pregnant while in custody.

At the end of 1949, she was brought before the Bavarian state tribunal again, and then on January 15, 1951 a court in Augsburg sentenced her to life imprisonment. She repeatedly asked for a review of the sentence and even for a pardon. The court rejected her applications each time. Eventually, on September 1 (or 2), 1967, Ilse Koch hanged herself on a sheet in her cell at the prison in Aichach.