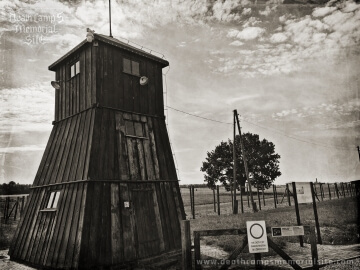 Field No. 1 is the oldest part of the German concentration and extermination camp "Majdanek" (KL Lublin - official name) established by the Germans in 1941 on the outskirts of the city of Lublin, in the district of Majdan Tatarski.

Initially, in the years 1941/1942, the first prisoners of the camp were held here: Soviet prisoners of war, local Jews and peasants from nearby towns, arrested as hostages in retaliation for their activity in the resistance movement or for failure to fulfill the obligations of giving food to the German occupiers.

In 1942, a camp hospital was established in the northern part and the camp office was established in one of the barracks. From September 1943 to April 1944, prisoners transferred from field 5 and a group of Jewish women transported from nearby labor camps. After the female part of the camp was liquidated in April 1944, men were re-imprisoned here.

The so-called Field I consisted of a total of 24 buildings, 2 larger barracks intended for kitchens and washrooms, and 20 wooden primitive residential barracks. Deprived of sanitary facilities, often overcrowded and underheated, they had a tragic impact on the high death rate among prisoners in the camp.