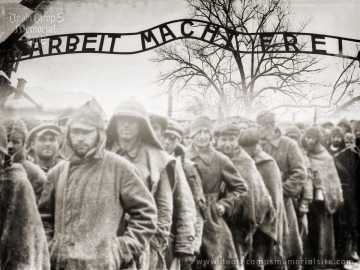 After the start of Operation Barbarossa in June 1941 and the initial military successes of the German army on the Eastern Front, thousands of Soviet prisoners of war were taken prisoner by the Germans.

Some of them ended up in German concentration camps, including Auschwitz. The first transports arrived in July and August 1941. At the beginning of September of the same year, the first attempt to gas the prisoners using Zyklon B was carried out in the basement of Block 11. The first group of prisoners who were killed included about 600 Soviet prisoners and 250 Poles.

Currently, on the premises of the museum in the north-western part of the Birkenau camp, in the place where the bodies of the murdered prisoners were buried, there is a monument and a mass grave of Soviet soldiers murdered in KL Auschwitz. It is estimated that about 14,000 of the 15,000 deported Soviet prisoners of war died.