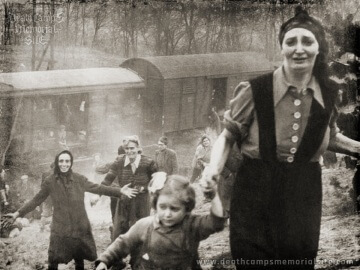 On Friday, April 13, 1945, the photos below was taken. It shows the release of prisoners from the train which left the German concentration camp Bergen-Belsen a few days earlier. The photos was taken by Major Clarence L. Benjamin of the US Army near Magdeburg in Germany.

A few kilometers north of Magdeburg, in a wooded ravine, a small reconnaissance group found a railway siding on which a train depot stood. About 2,500 Jewish prisoners were held there. It was one of three trains which left the Bergen-Belsen camp on April 10. The American soldiers saw a terrible sight of hungry, exhausted, sick women, men and children. The prisoners, seeing the American soldiers, began to leave the carriages in which they were "evacuated" in inhumane conditions.

Most of the prisoners came from Poland, Russia and other eastern countries. Gina Rappaport, who spoke English very well, provided the American soldiers with an extensive account. She lived in, among others, the Warsaw ghetto, and then she was sent to the German concentration camp Bergen-Belsen.

The train was "abandoned" by the German torturers after it had to change route due to the Soviet army approaching from the east. According to some sources, due to the impossibility of continuing the evacuation, the train was supposed to be blown up or run over a damaged bridge and then crash into the river.