Reinhard Heydrich - German Nazi with the rank of Obergruppenführer, police officer with the rank of general; head of the Security Service in 1932–1939, Gestapo in 1934–1939, Reich Main Security Office in 1939–1942, president of Interpol in 1940–1942, deputy protector of Bohemia and Moravia in 1941–1942. Chairman of the Wannsee conference and a Nazi criminal who was one of the main co-responsible for the Holocaust. One of the most trusted and ruthless people of Adolf Hitler and Heinrich Himmler. Creator of the SD (SS intelligence) and the Einsatzgruppen.
Reinhard Heydrich was born into a musical family. His father Brunon was a musician, composer and singer, as was his wife (Reinhard's mother), Elisabeth, who was also a music teacher. Reinhard had a three-year-older sister, Maria, and a brother who was a year younger, Siegfried.

In 1922, he passed his high school diploma and joined the navy, where he served until 1931. In April 1930 he was removed from service for participating in a "social scandal". Heydrich was brought before an honorary court and his behavior was found unworthy of an officer. Heydrich got engaged to Lina von Osten, whom he had met less than two weeks earlier, and at the same time was meeting the daughter of one of the influential Nazis.
On June 1, 1931, Heydrich, at the urging of Lina, joined the NSDAP, and then - after meeting with Heinrich Himmler - he was commissioned to establish the SD intelligence service - Sicherheitsdienst. In July 1932, he officially became the head of the Security Service of the Reichsführer SS, and in March 1933 Himmler appointed him chief in Munich.

Heydrich collected evidence against the management of the SA, which was used during the so-called "Nights of the Long Knives". About 200 people, alleged enemies of the NSDAP, including the head of the SA, Ernst Röhm, were liquidated during this action. The consequence of these events was an increase in the influence of the SS and SD and independence from the SA. On June 30, 1934, Heydrich was appointed Gruppenführer.
Heydrich’s career thrived. In 1936, he became the head of the Sicherheitspolizei (Gestapo and Kripo) and continued to lead the SD services. In 1938, after the annexation of Austria to Germany (Anschluss), he established the first branches of the Einsatzgruppen. He was ordered to organize the first wave of arrests and purges in the Austrian police. After the annexation of Czechoslovakia, Heydrich ordered the arrest of Czech communists, social democrats, Jews and priests. Over 10,000 Czechs and Germans who were considered "enemies of the Reich" were arrested. About 7,000 of them were transported to concentration camps in the Third Reich.

After the outbreak of the war, Heydrich became the head of the Reich Security Main Office (merger of the Security Police and Security Service), he also fought as a pilot, among others in the air raids on Lublin. In the years 1939-1941, he increased the number of Einsatzgruppen units. In 1941, four Einsatzgruppen divisions (A, B, C and D) were formed, which were divided into Einsatzkommando and Sonderkommando. An Einsatzgruppen branch had between 600 and 990 members who belonged to: SS, SD, Gestapo, Kripo, policemen from the 9th reserve police battalion from Berlin and the Leitender Dienst secret police unit. These troops were subordinate to the Reich Main Security Office (RSHA), headed by Reinhard Heydrich.
The Einsatzgruppen were supposed to eliminate on Jews, fanatical communists, government officials and the Soviet intelligentsia. The German expansion during the hostilities was perfectly prepared in terms of ideology, theory and tactics. The scenario of mass executions was usually similar. The victims were gathered in one place and then shot. The bodies were thrown into mass graves, often dug by the prisoners themselves in the nearby forests. By entering the territories of Lithuania, Latvia, Estonia, Belarus and Ukraine, Germany freed the population from the terror created by the communists. The local population joined in the mass murders of Jews and communists. They were also often local policemen and officials who took part in round-ups, executions and indicated the whereabouts of enemies of the Third Reich.

On September 24, 1941 Reinhard Heydrich was appointed deputy of the Protectorate of Bohemia and Moravia. Konstantin Hermann Karl von Neurath titularly was still the Protector, but all power rested in the hands of Heydrich, who introduced his reign of terror immediately after taking power. The repressions included round-ups, arrests, tortures, and deportations to concentration camps.

On January 20, 1942, in a villa located at Grossen Wannsee 56/58 on the edge of Lake Wannsee in a district of Berlin, a conference was held during which a number of decisions related to the so-called "final solution to the Jewish question" was made.
The conference was chaired by Reinhard Heydrich, and Adolf Eichmann was the recording clerk. Eichmann was also tasked with developing logistic assumptions in connection with the planned "resettlement" action. In total, 15 representatives of the German government, representatives of the SS, Gestapo and envoys from the General Government attended the conference. It was agreed at the conference that Jews were to be deported to the east and imprisoned in ghettos, and then "evacuated" east to the created and functioning extermination camps.

The conference discussed the subject of mass murders in the territory of the USSR and presented the logistic assumptions related to the deportation of Jews from occupied Europe, as well as the very classification of "who is a Jew". The origin was determined on the basis of the amount of Jewish blood resulting from the family tree. It was decided who was to be "deported" east.

At the turn of 1941/1942, there was an increase in the activity of resistance movements, and one of the operations was the so-called Operation Anthropoid - the attack on Reinhard Heydrich himself.
The attack took place on May 27, 1942, and the executors were Jan Kubiš and Jozef Gabčík. A sharp turn in Prague-Liben was chosen for the ambush. During the speed reduction, a shootout broke out between Jozef Gabcik and Heydrich and his driver. Jan Kubiš, throwing a modified hand grenade, damaged the car and seriously injured Reinhard Heydrich. After not fully successful action, the bombers managed to escape and for some time they hid with six other paratroopers in the crypt of the Orthodox cathedral of Saints Cyril and Methodius. The Nazis discovered the hideout due to the betrayal of Karel Čurda, who revealed the names of people who helped the paratroopers. On June 18, 1942, the cathedral was surrounded by the SS and the Gestapo. Gabčik, Jaroslav Švarc, Jan Hrubý, Josef Valčík, Adolf Opálka and Josef Bublík committed suicide in the encircled church. Kubiš, on the other hand, lost consciousness, wounded by grenade shrapnel in the church choir, and died in the sanitary facility during transport to the hospital.

Heydrich died on June 4 in hospital as a result of his injuries. As part of the repression, 1,000 people were arrested by the end of June 1942. After false information that the attackers were hiding in Lidice, the families of two Czech officers of the former Czech army were murdered, and Hitler ordered Lidice to be razed to the ground. Almost 200 men were shot, 198 women were transported to the Ravensbrück concentration camp, several children were found susceptible to Germanization, and the rest were murdered. In addition, 33 people were shot in Ležáky because of a Czech radio operator who was hiding there and two hiding places for Czech paratroopers.

Heydrich's body, placed in a coffin, was transported on a carriage to the Hradcany castle, where it was displayed in the honorary courtyard, assisted by the SS guards. Thousands of people paraded in front of the catafalque until the funeral ceremonies began, including many Czechs who still did not realize what awaited them from the Germans, who had already begun to avenge the death of Heydrich.
Adolf Hitler ordered a magnificent state funeral in Berlin, where the main funeral ceremonies took place. It was attended by the most important people in the Reich, as well as Heydrich's wife and sons. The funeral was also attended by representatives of the Czech government, who officially condemned the attack on the Protector of Bohemia and Moravia.

As a result of Nazi repression throughout the summer of 1942, the Czech resistance movement, including the ÚVOD organization and its entire Central Committee, was practically liquidated. As a result of the wave of repression, more than 7,000 Czechs were arrested, of which almost 1,500 were sentenced to death. Another 4,000 were sent to concentration camps, prisons and extermination camps. The support of the Czech society for the resistance movement also weakened, so that the attackers unintentionally contributed to the "pacification" of the Protectorate.

Reinhard Heydrich was buried in an ordinary grave at the Invalids Cemetery. Moreover, in Prague, at the site of the attack, the Nazis erected a monument in his memory in 1943, at which SS soldiers were constantly on guard until 1945.
The codename Operation Reinhard comes from his name, also known as Action Reinhardt or Einsatz Reihhard. It was the code name of the action of extermination of Jews from the General Government.
Reinhard Heydrich was the highest-ranking SS officer and a man from Hitler's closest circle who was killed in the assassination attempt.

Personally, I recommend the following books to learn more about Reinhard Heydrich:

In my opinion, the best biography is: 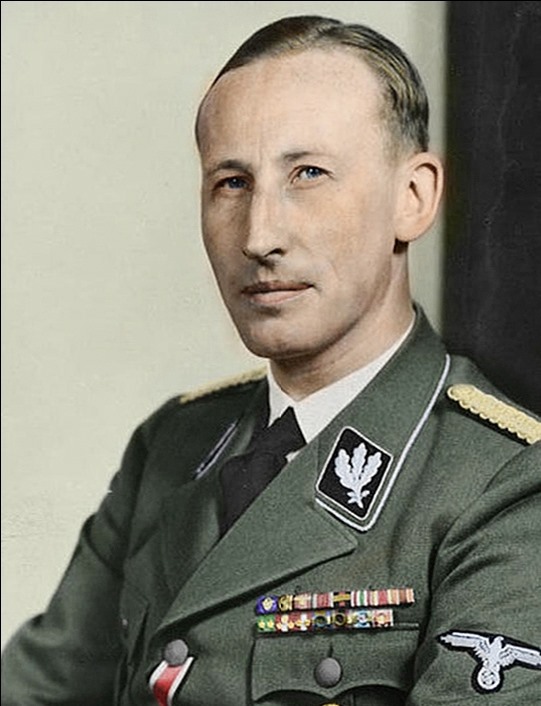