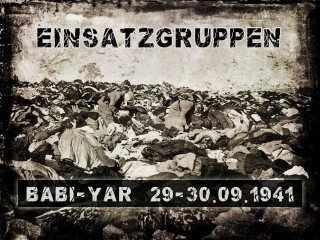 On September 29-30, 1941, one of the most notorious crimes of the Second World War took place in the Babi Yar gorge in the north-eastern part of Kiev. German troops of Einsatzgruppen C, specifically Sonderkommando 4a, with the support of the SD and SS Police Battalions and the Ukrainian Auxiliary Police supported by the Wehrmacht, shot almost 34,000 people, mainly Jews.

Under the guise of deportation, the Jewish residents of Kiev were ordered to pack their most valuable items, including money, jewelry and other valuables. Then, the Jewish population was escorted by the Ukrainian police and the SS to the ravine in Babi Yar. People were ordered to undress completely. Groups of ten people lay on the bodies of the murdered and then died from a shot in the head.

The following people were directly responsible for the massacre: Kurt Eberhard, Commander of the Police of the Army Group South, SS-Obergruppenführer Friedrich Jeckeln and Einsatzgruppe C commander Otto Rasch, as well as Sonderkommando 4a commander Paul Blobel. Later, a concentration camp was established there where Jews, Poles, Ukrainians, Roma, communists and other enemies of the Third Reich were murdered.

Today, there is a memorial site, several monuments dedicated to the victims, an avenue of martyrs, a monument to the murdered Roma, an avenue of the righteous and a chapel. It is worth mentioning that Babi Yar was previously also the place of execution of NKVD victims.