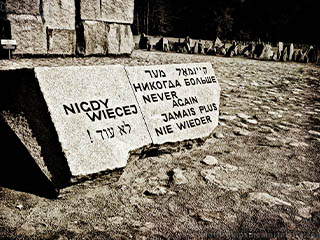 On November 17, 1943, the German extermination camp in Treblinka was finally liquidated. On that day, the last group of 25-30 prisoners from the so-called Restkommando, responsible for demolishing the camp infrastructure and covering up the traces of the crime, was shot.

After the prisoners' revolt, which took place on August 2, 1943, part of the camp was destroyed and about 150-200 prisoners managed to escape. After the uprising, the camp commandant, Franz Stangl, was fired and his duties were taken over by the then deputy Kurt Franz, whose task was to raze the camp to the ground. The last mass transport arrived in Treblinka on August 23, 1943 from Białystok. The transport was sent to the gas chambers, and then the camp was liquidated.

Under the command of Kurt Franz, a group of about 100 prisoners began to demolish the buildings and the camp fence that had survived the rebellion. All the stolen property of the victims was also transported deep into the Reich. In October, some of the Restkommando prisoners, around 40-50, were sent to the death camp in Sobibór.

The area of the camp was plowed and sown with lupins, and the places of mass graves were also covered with a layer of soil from the nearby gravel pit operating at the Treblinka I penal camp. The site of the former camp was disguised as a farm. The camp bakery was converted into a dwelling house (e.g. bricks of the gas chamber building were used for this purpose) and provisional farm buildings were built.

The whole action ended on November 17. The last prisoners who took part in the liquidation of the camp were shot and their bodies were burnt by Ukrainian watchmen. Then, all the torturers left the area of the former extermination camp - all except the Ukrainian watchman, who lived with his family in the quickly constructed "farm". His task was to look after the area of the now defunct camp. In mid-July 1944, the family set fire to the farmhouse and fled towards Warsaw, knowing that the Red Army was approaching from the East.

The German Nazi extermination camp Treblinka II was the largest extermination center in the General Government, and the second, after Auschwitz, in occupied Europe. In the period from July 23, 1942 to August 23, 1943, it is estimated that 800,000 to 1,000,000 people died there. The exact number of victims cannot be determined, but 800,000 is recognized as a certain number. The victims were mainly Jews. About 760,000 came from Poland, but there were also Jews deported from Austria, Bulgaria, Belgium, Czechoslovakia, France, Greece, Yugoslavia, Germany and the USSR, as well as Roma and Sinti from Poland and Germany.